As a follow-up to the unveiling of our office in SÃ£o Paulo, weâ€™re providing more information about the enormous opportunities existing in Brazil. This massive, emerging market is enjoying a period of unparalleled political and economic stability. Brazil has successfully weathered the global downturn and is surging forward. 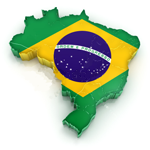 Canadian exports to Brazil have increased dramatically in recent years, and warm relations with the South American giant bode well for future growth across a number of industries.

Brazil Surges
Rio de Janeiro’s recent selection as host for the 2016 Olympic Games is symbolic not only because it represents the first time a Latin American country has been chosen, but, equally, it emphatically affirms the arrival on the scene of Brazil as a global force. Forecasts vary, but at some point in the next twenty years, much sooner than many predicted, Brazil is likely to become the worldâ€™s fifth-largest economy, surpassing Britain and France. By 2025, SÃ£o Paulo is expected to become its fifth-wealthiest city, according to PWC, a consultancy. And, when compared to other members of BRIC, the acronym that refers to the fast growing developing economies of Brazil, Russia, India, and China, Brazil enjoys several advantages in the eyes of exporters and investors:

â€œUnlike China, it is a democracy. Unlike India, it has no insurgents, no ethnic and religious conflicts nor hostile neighbours. Unlike Russia, it exports more than oil and arms, and treats foreign investors with respect.â€ (Economist, November 9)Â

Canadian Exports to Brazil
In 2008, Canadian exports to Brazil surged more than 70 per cent to $2.6 billion, making Brazil Canada’s third biggest export destination in the Americas, behind NAFTA partners the United States and Mexico. Leading imported Canadian products include machinery, wood, pulp & paper, agriculture & agrifood as well as consumer goods. The strong real, which has gained almost 50% against the dollar since early December, has boosted Braziliansâ€™ living standards by making imports cheaper. The economic rebound in Brazil is also driving demand for imports. The economy expanded at a rate of 1.9% in the second quarter from the first quarter. With Brazil headed for a robust recovery, the economy is seen as expanding by 5% in 2010. As strong growth continues, expect imports to rise from now on.Â Â

Seize the Opportunities
Brazil remains a market left relative untapped by many Canadian exporters and investors â€“ the risk is that Canadians will be left behind as more aggressive nations enter the market. Key issues to consider include foreign competition, import tariffs, tax and regulatory systems. There are export opportunities as well as licensing and JV arrangements to consider as potential modes of entry for Canadian companies.