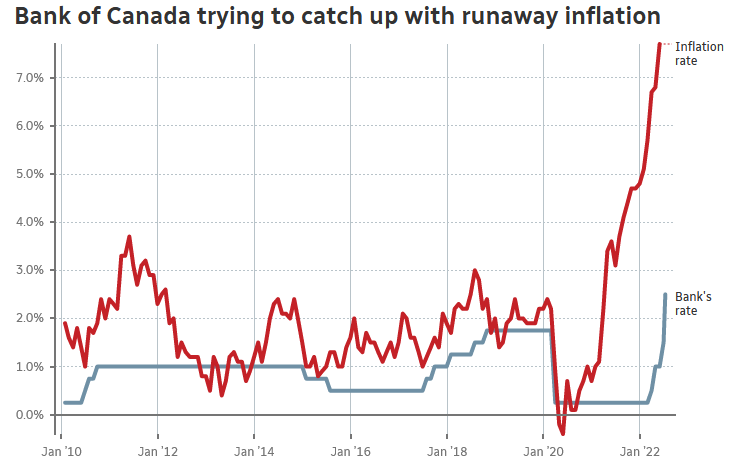 The Bank of Canada has raised its benchmark interest rate by the largest amount in more than 20 years, sharply increasing the cost of borrowing in an attempt to rein in runaway inflation.

Canada’s central bank raised its benchmark interest rate Wednesday by a full percentage point to 2.5 per cent. That’s the biggest one-time increase in the bank’s rate since 1998.

The bank’s rate impacts the rate that Canadians get from their lenders on things like mortgages and lines of credit. Two of Canada’s big banks have already moved their benchmark rates in response, with Royal Bank and TD raising their prime lending rates from 3.7 per cent to 4.7 per cent as of Thursday morning.

The other major lenders are expected to follow suit in short order.

All things being equal, a central bank cuts the lending rate when it wants to stimulate the economy by encouraging people to borrow and invest. It raises rates when it wants to cool down an overheated economy.

After slashing its rate to record lows at the start of the pandemic, the bank has now raised its rate four times since March as part of an aggressive campaign to fight inflation, which has risen to its highest level in 40 years.  Read the full article here.